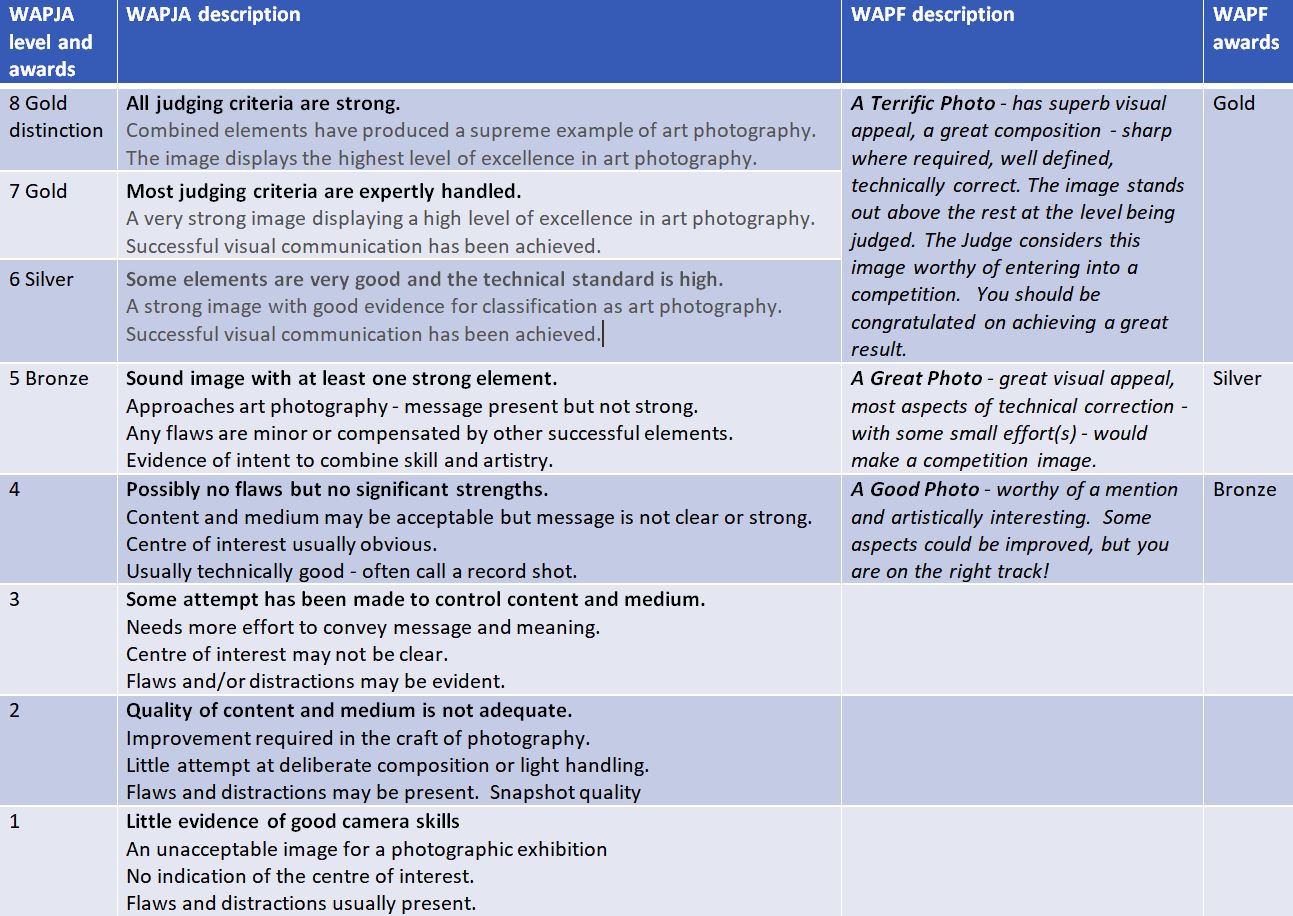 A note from Colin White, inaugural president of the WAPJA:

This information is for club representatives as well as judges.

There have been some questions raised about the relationship between the WAPJA exhibition scoring system and that of the WAPF.  I have attempted to show it in the comparison chart above, a larger, printable version of which is available in the Library and Resources section.

Basically, the WAPF system is a relative system where the judge aims for 50% of the entered images to be awarded a medal - either a bronze, silver or gold.  A gold in the WAPF system is typically an image that might gain an acceptance in an interclub competition.  Bronze in this system is an encouragement award, and typically would be about “average” WA club standard.  As you appreciate, average means different things to different people, but remember we are talking about camera clubs where having fun is part of the deal, so let’s not get too serious; when in doubt, be generous.

The WAPJA system is designed to be an absolute scoring system that encourages art in photography.  We acknowledge that no such thing as an absolute scoring system exists in the real world of art, but its aim is to try and standardise the awards across competitions and clubs. This means it tries to set a (generally) higher standard than the WAPF system, and in theory should be the same wherever it is used. Note that the critiquing terminology is the same for both systems.  A useful rule of thumb is that about 30% of the images in an average WA club would receive an award under the WAPJA system.  In some smaller clubs or those with lots of new members, it could be lower than that.  The proportion could be higher or lower depending on the overall club standard.  A gold in this system would be for an exceptional image, and should be the same as a gold in an interclub or larger competition.  A bronze should be for images that show successful evidence of intent towards art photography, and usually these are better-than-average images on a club night.

The WAPJA hasn’t formulated a policy on advising clubs on what system they should use, and currently it advises judges to make awards in the way that the clubs desire.  I believe that WAPJA judges have the training and experience to adapt to whatever system is requested.  We are here to service clubs, and judge accordingly, not to dictate systems.  At the end of the day, club members should get a valuable critique of their work, and an award according to club policy.

My personal view is that, if clubs are going to adopt a GSB exhibition system, then the WAPF system should be the default – it is probably the easiest to apply and offers the greatest rewards to more people.  A gold in this system, if awarded, would generally go to the best images on the night, and a bronze could still contain some obvious technical flaws. Because it is a relative system, it is easier for a judge to apply than the WAPJA system.

The WAPJA system is designed for interclub and higher level competitions and for those clubs that want their awards on club night to more closely resemble what might happen at interclub or national competitions.  The WAPJA system also makes use of level numbers from 5 to 8.  These levels are for use in multi-judge events, where images must be either ranked or assigned a quantitative score/level by each judge.  The numbers are not recommended for use by judges on a club night.  Club judges already have enough to do without assigning scores.

As judges, we need to deal with a very wide range of individuals and clubs at various stages of their photographic journey.  Novices need to be encouraged, as do small clubs with new members or members not especially interested in becoming photographic artists.  So keep it simple, give sound critique and offer awards appropriate to the critique and the judging system desired by the club.

In summary, don’t sweat over the system.  GSB awards are difficult, and different clubs have adopted different standards.  Try to match the awards to the critique.  If in doubt, aim to be generous, but as a starting point, use a proportion of 50% of entries for WAPF awards and 30% for WAPJA awards on an average night, and go from there.  Golds will be common in the WAPF system but less so in the WAPJA system.

Remember, we are doing this because we love it.